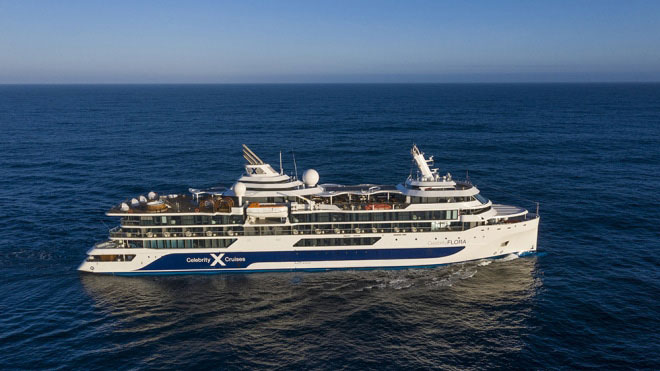 Meet the Women Behind the Galapagos’ Most Sustainable Cruise Ship

Designing the Celebrity Flora meant adhering to stringent environmental requirements and bringing a new level of luxury to the Galapagos Islands. Here are the four women who made it happen.

As one of the most diverse and fragile environments on the planet, and as home to a wide array of native flora and fauna, the Galapagos Islands put sustainability and environmental protection above all.  That can sometimes be a challenge—particularly as tourism to the islands continues to grow.

It’s with that in mind that Celebrity Cruises this summer launched Celebrity Flora, the first ship of its kind to be designed and built specifically for the Galapagos. Limited to just 50 suites (and 100 passengers total), the sleek, luxury megayacht reflects the region in everything from its décor and cuisine (with many materials and ingredients sourced locally) to its sustainable mechanics and practices. The list of the latter is long: In addition to being one of the most energy-efficient ships in the Galapagos (with a 15 percent reduction of fuel consumption and considerably fewer air emissions), the Flora employs stringent recycling, waste management, reverse osmosis and food waste programs, has reduced single-use plastics by 90 percent and features a first-in-the-area anchorless technology that helps maintain the ship’s position while protecting the sea floor and limiting underwater noise pollution. Celebrity Flora is the first vessel in the Galapagos to feature cutting-edge Oceanscope research equipment, which will track and map the region while measuring sea-surface temperatures and gathering other critical data. (All findings will be open-source, making them accessible to scientists and enthusiasts from around the world.)

Naturally, it took a small army to bring the state-of-the-art ship to life. Chief among them were these four women, who were instrumental in its design, development, programming and philosophy—and who not only met the challenges associated with creating such a vessel head on but helped elevate the project to new levels.

A native of Italy and now based in New York, Bucci and her BG Studio team have crafted everything from high-end residences and trendy restaurants to over 25 large cruise ships. Few projects, though, came with the requirements of Flora, which had to not only be the most luxurious ship in the Galapagos but also meet the government’s stringent environmental requirements. For the interiors, Bucci created the largest staterooms and suites in the region, all featuring local materials, filtered water taps, spacious bathrooms, floor-to-ceiling windows (some of which retract for an “infinite verandah” feeling) and beds that face outwards, to take advantage of the views. (The ship itself also boasts the most outdoor spaces of any Galapagos cruiser, including a unique “glamping” set-up and a stargazing deck.) On the sustainability front, some of Bucci’s more unique challenges included painting the ship’s hull in a special silicone so it could move more efficiently, sourcing materials that could be cleaned without the use of harsh chemicals and designing outdoor lighting in specific colors and temperatures so as not to attract insects—as they could inadvertently be carried from one island to another and disrupt the native habitats.